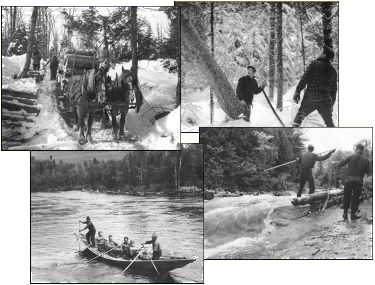 The current ownership of the North Maine Woods is complicated due in part to the historical events of the last two centuries. In about 1783, Maine and Massachusetts were one state and the area that is now Northern Maine was divided into six-mile square townships and sold at auction. By the time it became a separate state in 1820, over half of Maine (10 million acres) had been sold or granted. The remainder of the land was sold by 1878. In many cases, two or three people jointly purchased in common, and undivided, one or more townships. Over the years, the many heirs of those original buyers have further diversified the ownership.

An heir might have owned an undivided 15% of the whole township, that is 15% of every tree, rock, road, etc. Beginning around the turn of the century, some of the family owners began to sell their holdings to industrial landowners. Industrial ownerships increased during the 20th century while at the same time the remaining family ownerships were divided into smaller shares with each succeeding generation. The ownership is now a combination of private individual, private industrial and public interests. The complicated ownership by township is compounded as there are 155 townships within the NMW management area.

This diversified ownership pattern is the primary reason for the NMW organization. Recreational users of the area are guided by one set of uniform regulations and fees. Users do not have to obtain several permits or pay different user fees to many separate landowners. 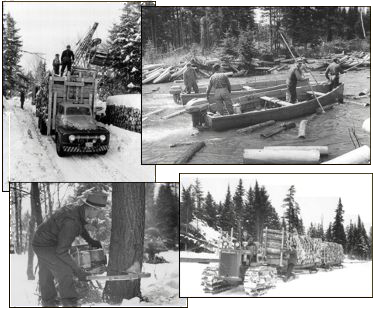 The concept of North Maine Woods evolved from a landowner committee organized in the mid 1960's to resolve differences between logging contractors over road use and maintenance. Log drives were ending and the major access road systems were expanding. As a result of the improved access, there was a significant increase in recreational traffic as more people took to the woods to hunt, fish and camp. Individual landowners began to establish their own control gates to manage these new pressures.

Unmanned gates were constructed as part of an agreement with the State of Maine to keep the number of access points to the Allagash Wilderness Waterway to a minimum. Other gates were erected at the request of U.S. Customs and Immigration to prohibit travellers from using the private road system as a shortcut between Maine and Quebec. During the 1970's travel within the interior of the area was restricted by as many as 26 unmanned locked gates.

Over the past thirty years, landowners have become comfortable with the knowledge that their property was safer inside the managed area and most interior gates were removed. The number of access points to the Allagash Wilderness Waterway is now controlled by regulation rather than gates. Today travel is possible throughout the entire area with only a few restrictions. This was accomplished through agreements made between adjacent landowners and between landowners and governmental agencies.

In the early 1970's NMW began as an association and assumed the operation of several checkpoints on the perimeter of the area. In 1975 the association changed to a partnership. NMW became a non-profit corporation under Maine law in 1981.

The North Maine Woods area has experienced two expansions. In 1985, the size of the managed area increased by three hundred thousand acres along the southwest border with the addition of lands surrounding Baker Lake and Wadleigh Pond. In 1999, another seven hundred thousand acre tract was added to the southern boundary to include property from Chesuncook Lake west to the Quebec border. These expansions have resulted in many unmanned steel gates being eliminated to allow sportsmen the ability to travel from Greenville, Rockwood or Millinocket all the way to Fort Kent or Ashland. Through economies of scale, these expansions also provided for cost efficiencies and user fee decreases for some categories.

Another change occurred in 1986 when North Maine Woods, Inc. was contracted by several other landowners to manage the 170,000 KI Jo-Mary Multiple Use Forest.

The landowners have coordinated the management of recreational use within the NMW area with state agencies. Visitor use information is shared with various agencies to aid them in planning. NMW has a contract with the Bureau of Parks & Land to collect Allagash Wilderness Waterway and Penobscot River Corridor user fees as visitors pass through the NMW checkpoints. This contract eliminates duplication of effort and expense and allows a visitor travelling to the park lands to register in only one place. Maintenance of campsites on some Public Reserved Lands is carried out by NMW under another contract with the Bureau of Parks & Lands. State Personnel serve on various NMW committees helping with the administration and planning for the organization.

Hosted & Maintained By WEBXCentrics Design Group
Back to Top